Navigating the PSD2 Challenges and Developments with Aiia

As society is rapidly moving towards a cashless society, fintechs, banks, and financial authorities have to constantly adapt to facilitate a safe and seamless transition. With this rapid change comes a lot of pressure due to the changing regulations and customer expectations. Read this interview with Rune Mai, CEO and CoFounder at Aiia to learn how Europe’s most experienced open banking platform navigates these challenges. 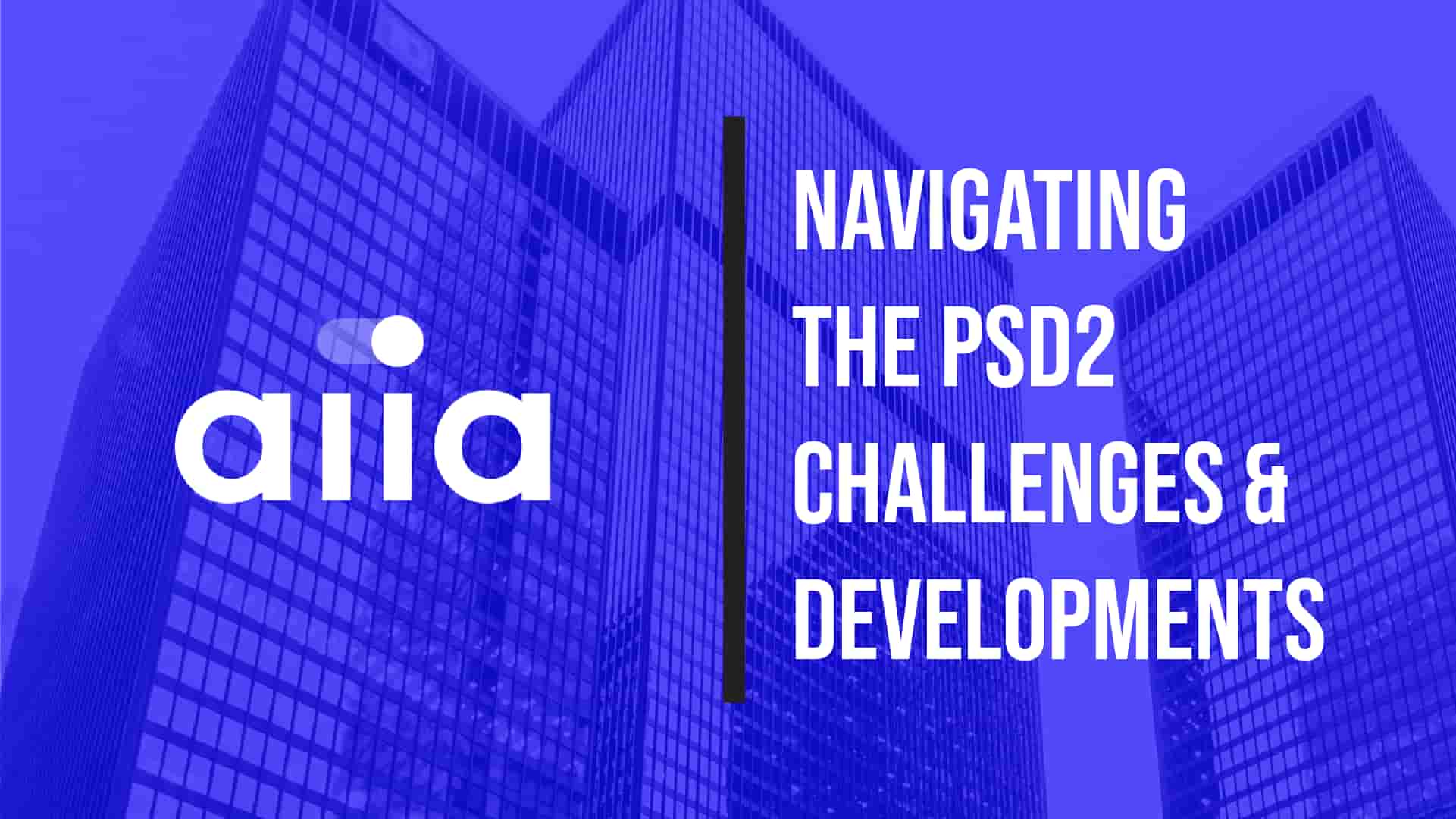 Being a player in payments for a decade, what are some of the biggest changes you have witnessed in payments over the past 5 years?

Going back all the way to 2010, one of the reasons for building Aiia in the first place was that when the housing bubble burst and people lost all the cash they had bound to their houses. When they had to send their valuable items back because they could no longer afford it, I noticed that something changed with money. There was no technology to make money tangible in the digital space. That's what we set out to build as a start when we launched our own PFM app, Spiir, more than ten years ago.

What has happened since then within the payment space is that payments have become increasingly intangible as we are on a very fast journey towards a cashless reality. This has been accelerated even further as people have opted out of cash payments due to hygiene reasons during the pandemic. Even in Germany, some of the most stubborn cash users, you can see that cashless transactions exploded over the past year.

The card industry itself has been working on tokenization of cards where they want to build an API out of a card. We had the EU policymakers who also started focusing on how to liberate both data and payments from banks themselves and make it a more competitive field.

“The biggest change I noticed is that we moved from a fairly physical world when we talk about payments to now and almost 100% digital.”

Interestingly enough, while self-checkout, an increasingly popular feature, makes it seem like your payments are anonymous, your contactless payments are more trackable than ever because merchants now can do behavioral analysis on every decision you make leading up to purchasing an item.

“In reality, a payment is 100% uninteresting by itself, what is interesting is the context of the payment and what that context generates in terms of data or trust.”

How can open banking become mainstream?

First, there is the API which needs to be fully matured for it to be fully effective. Then, businesses who wish to leverage these APIs need to be educated on offering a solution that is desirable by the consumer. The next step would be to understand at what point consumers will adopt open banking in their daily lives. I would say that we are in the midst of that phase right now. The adoption is rising and the curve of maturity is significantly increasing, especially in the Nordics, Germany, Holland, and the UK.

“The consumer needs to be educated about the opportunities open banking presents to unlock a massive wave of adoption.“

Two things people didn’t realize about psd2 is that it came with very strict regulations on online security and strict SCA requirements(Secure customer authentication) which is a level playing field for any payments solution. That explains why online card flows aren't as smooth as they used to be because you used to be able to put a card on file and then just execute a payment instantly. However, the SCA act states that you should be authorizing a party to move money from your account.

How does Aiia manage high-quality integrations given the numerous API standards set by the PSD2 regulation?

First and foremost, the hardest part about banking is getting the APIs right. The analogy I like to use is that if you don't have the best pipes laid out and the water runs smoothly, it starts to leak and your water becomes rusty until people refuse to use it any longer. So getting these “pipes” right from the get-go is the hardest part because we could have also chosen to just very quickly scale to the European level with the APIs once they were there in 2020 or so when everyone became fully ready.

What we did instead was we saw ourselves as a European company from day one, but we started in the Nordics because we needed to study and implement procedures for building quality into open banking in a market where we saw that the providers of the main interfaces never before had been building public interfaces to be consumed by secondary technical services. So how do you do that? We have all the mechanisms by the FSA side, but banks don't necessarily have a positive association with that. They see it as a compliance burden. We, therefore, spent a long time figuring out how to work together with banks. Only when we agreed to disagree, we brought in FSAs (Financial Supervisory Authorities) to mediate and got their view on how things were.

I think with that strategy and also taking the role of maturing those interfaces on behalf of our clients, we matured into today having a process where we can go to a market and then move it from pilot to beta, to production fairly fast with a high level of confidence.

We implement data and payments in a market of up to 90%. That's still only in the pilot because the next thing is that we use our own network of testers to test these networks. We leverage and work closely alongside pilot customers that we engage with and provide enterprise service levels for free throughout the starting phase.

This enables us to collect enough testing material, ensuring our high-quality of API’s and ensuring that the pilot customers get the best possible experience entering their open banking journey.  To some extent, we have competitors of course. They are active and also doing a lot of maturing in many of the markets. But doing this the right way has been very hard to structure without losing focus on your clients. If we had just hurried out to the rest of Europe, we would have ended up having a client in Spain and one in France and one in Germany, and some in the Nordics. All of them would be complaining about poor “pipes” at the same time. We would be clocked up in discussions with everyone here and there and every local efforts team and so forth. So now we have the scaling model in place and we’ve shown over and over again that we’re the true craftsmen in the rapidly evolving world of open banking.

In terms of adoption and being able to gain clients and have them build solutions that someone wants to use, the Netherlands is a very attractive market to us.

We mainly wanted freelancers and those starting a new business to be able to use data to enhance their lives so they can get away from the administrative burden. This allows them to focus on value production.

Aiia is the most experienced open banking platform in Europe, with more than a decade of experience in fintech and open banking. Today, Aiia has more than 2,900 connected banks across Europe, processes more than 10 million bank logins and more than a million account-to-account payments every month for large banks and e-commerce payment gateways.

In 2010 Rune started his journey as a fintech entrepreneur, launching the personal finance management tool, Spiir, which later on has become a massive success in the Nordics supporting nearly half a million millennials with an app that nudges financial awareness automatically. He has always had an eagerness to bring positive change to society through technology and empower people to bring their financial data into play safely and transparently.  A mission that he managed to scale even further in 2017, when the major Nordic bank Danske Bank strategically invested in the company to make financial innovation flourish even further. After the investment, Rune Mai managed to pivot the company into the open banking platform Nordic API Gateway (Today known as Aiia).

The PaymentGenes FinTech magazine & "Voices In Payments" Podcast are initiatives to positively impact the payments community, by educating and connecting the market with vertical-specific industry expertise.

PaymentGenes Empowers Business growth by providing expertise-driven Recruitment, Contracting, Consultancy Services. These services all resolve and intersect around payments. Get in touch and learn more about how we can help your business here.

Navigating the PSD2 Challenges and Developments with Aiia

As society is rapidly moving towards a cashless society, fintechs, banks, and financial authorities have to constantly adapt to facilitate a safe and seamless transition. With this rapid change comes a lot of pressure due to the changing regulations and customer expectations. Read this interview with Rune Mai, CEO and CoFounder at Aiia to learn how Europe’s most experienced open banking platform navigates these challenges.